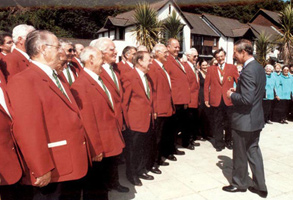 Wales’ only truly regional male choir was formed in 1982 to undertake a tour of the Eastern United States, as a result of Welsh-American promoters witnessing a Royal Albert Hall 1,000 Welsh Male Voice Concert. Performing with leading symphony orchestras under the baton of the BBC’s Alun John and patronage of HRH The Prince of Wales, the 530 choristers from 42 different choirs received rave reviews resulting from 5 sell-out concerts in Pittsburgh, with Baltimore, Washington, New York (where crowds queuing for tickets, at the Cathedral of St John the Divine, stopped the traffic on Broadway!) and finally Buffalo witnessing the Welsh Male Voice tradition at its best.

Success and enjoyment in the 1983 tour had been so great that back home at the ‘winding-up’ meeting, no fewer than 153 choristers (the number present!) unanimously voted to continue; the ‘raison d’etre’ being to continue to take abroad the traditions of the Welsh Male Choir.

To date, 22 tours have taken place – USA (4), Canada (3), France, Gibraltar, Eastern Europe, Australia, together with no fewer than seven Commemorative Tours to the WWI and WWII Battlefields of Flanders and Normandy performing often before Royalty, Government Leaders and most importantly Veterans. The choir has even travelled to Monaco for a one-off concert in the International Sporting Club, and cruised the Baltic with shore based concerts in Russia, Estonia, and Norway – we have just returned from Belgium and appropriately Germany this year.

Regular concerts in the UK have been included since the late ‘80s with St David’s Day celebration concerts nearly always being performed outside Wales. These have included visits to Cheltenham Town Hall, Hereford Cathedral, Oxford Town Hall, and Wantage (which has proved extremely popular of late!!)

The first annual concert supported by our core sponsor Texaco, took place in St David’s Hall, Cardiff in 1987. Côr Meibion De Cymru is now sponsored by that company’s successor at Pembroke Refinery, Valero. Since 1987, we have staged a sponsored concert every year*, and are very proud of the fact that the venue is now St. Davids Cathedral, Pembrokeshire. (*Although, there was no Concert in 2014 as The South Wales Male Choir was in Flanders honouring the memory of the British Expeditionary Force and their sacrifice 100 years ago)

Over the years The South Wales Male Choir has been hugely fortunate to have secured the services of many esteemed conductors and accompanists. The choir’s first conductor, Alun John, was followed by John Samuels and Alec Brooks. In 1999, a major change to the choir’s appearance on stage came with the appointment of Haydn James, who demanded that choristers must no longer use music copies during performances! This crucial change allowed for the quality of the singing to reach an even higher standard, and for the audience to feel a stronger connection to the choir. D Eifion Thomas further enhanced Haydn’s progress to the point that when the first lady Musical Director of SWMC, Elaine Robins took over, the choristers were enjoying their music more and more.

Competition success came about under Elaine’s guidance and amazingly, piano accompaniment has remained through the choir’s history with a Ferndale ‘Davies’ (originally the late Bryan Davies, and since 1993 with daughter, Siân Davies).

Ladies continue to add to the SWMC tradition, not just on the stage, but behind the scenes as well. The ‘Ladies Support Group’ raise thousands of pounds every year, adorn auditoriums in their traditional Welsh Costumes, sell CD’s and memorabilia and are very much part of the SWMC ‘family’. The choir is also very proud to have its own supporters club. The ‘Friends of SWMC’ now number in excess of 96 individuals and virtually every concert sees a new name joining our group of Friends!

The South Wales Male Choir’s ethos can be summed up by its original piano accompanist Bryan Davies, who said, “Music is a serious business, but it’s got to be fun”. Three loud ‘Amens’ to that! 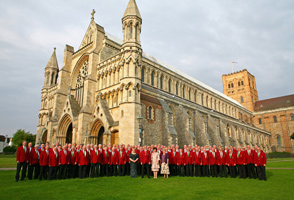 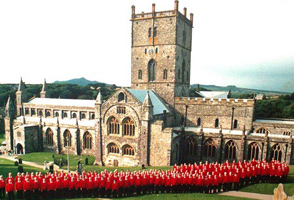